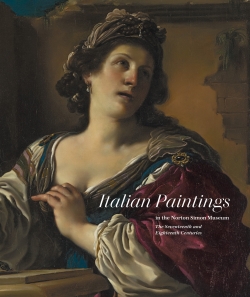 This in-depth publication, written by Nicholas Penny, examines the Museum's outstanding collection of Italian paintings from the seventeenth and eighteenth centuries

Pasadena, CA—The Norton Simon Art Foundation is pleased to announce the publication of its latest collections catalogue, entitled Italian Paintings in the Norton Simon Museum: The Seventeenth and Eighteenth Centuries. Written by Nicholas Penny, Director Emeritus of the National Gallery, London, the volume provides an in-depth look at the later Italian paintings collection housed at the Norton Simon Museum, including works by Guido Reni, Guercino, Luca Giordano, Giambattista Tiepolo, Cagnacci and Canaletto. The publication is designed by Lucia|Marquand and distributed by Yale University Press. A second volume, on Italian paintings from the 14th through 16th centuries, is currently in development.

Norton Simon amassed more than 100 Italian paintings during his art-collecting career, and today they stand among the treasures of the Norton Simon Museum. In this catalogue—the first of two volumes devoted to the museum’s Italian painting collection—noted art historian Nicholas Penny pairs 47 works of art (45 paintings, plus one tapestry and one sculpture) from the 17th and 18th centuries with in-depth commentary. Skillfully weaving intricate tales of the artists’ lives, their technical peculiarities and their relationships with other artists and major patrons of their time, Penny delivers some of the most thorough descriptions of these works written to date.

In addition to Penny’s descriptions, each entry includes technical information, including materials and technique used by the artist, details on the painting’s support, condition, conservation history and any inscriptions or markings. Also included is the object’s ownership history, or provenance, including details on its acquisition by Norton Simon, as well as its exhibition and loan history, and information on its frame. Beautiful full-color reproductions of the objects, including several folios, make this publication an excellent resource for scholars and art lovers alike, who will also learn of Norton Simon’s matchless techniques for forming this part of his large collection, often described as the best of its kind in the western United States.

In celebration of the publication, the Norton Simon Museum is producing three short videos, narrated by Nicholas Penny, that delve into works of particular interest. The first episode will premiere on the Museum’s website on February 22.

Sir Nicholas Penny was director of the National Gallery in London from 2008 to 2015. Before that, he was a senior curator in the National Gallery of Art, Washington, DC. He is the author of many museum catalogues, of both painting and sculpture, and of books on topics ranging from church monuments to Lucian Freud. He was Slade Professor at the University of Cambridge for 2019 – 2020 and is currently visiting professor at the China National Academy of Fine Arts in Hangzhou.

About the Norton Simon Museum

The Norton Simon Museum is known around the world as one of the most remarkable private art collections ever assembled. Over a 30-year period, industrialist Norton Simon (1907–1993) amassed an astonishing collection of European art from the Renaissance to the 20th century, and a stellar collection of South and Southeast Asian art spanning 2,000 years. Modern and Contemporary Art from Europe and the United States, acquired by the former Pasadena Art Museum, also occupies an important place in the Museum’s collections. The Museum houses more than 12,000 objects, roughly 1,000 of which are on view in the galleries and gardens. Two temporary exhibition spaces feature rotating installations of artworks not on permanent display.

Location: The Norton Simon Museum is located at 411 W. Colorado Blvd. at Orange Grove Boulevard in Pasadena, Calif., at the intersection of the Foothill (210) and Ventura (134) freeways. For general Museum information, please call (626) 449-6840 or visit nortonsimon.org.

Connect with Us: Visit us online for information on our many virtual programs, or stay connected through our social media channels.