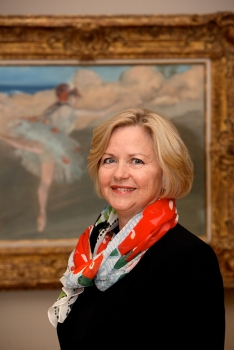 Carol Togneri: Can you start by telling us about Norton Simon’s fascination with Degas?

Sara Campbell: Mr. Simon had several “favorite” artists, and he collected their works in large numbers, especially those of Picasso, Rembrandt and Goya. But whereas those artworks are chiefly etchings and lithographs, the Degas collection features 6 oil paintings, 18 pastels, 6 drawings and graphics, and 72 bronzes.

CT: I have always found the process of bronze casting so complicated. Can you explain about this set of modèles Mr. Simon purchased, and why they are so special?

SC: Degas created his sculptures in a material mainly composed of wax. After his death, it was decided to reproduce these figures in bronze. In order to preserve the valuable wax originals, the bronze foundry created “modèles,” or foundry models from molds carefully made from the waxes. The modèles were then used as the matrices to cast the many editions of Degas’s bronzes that we find in museums. Since the modèles are the closest to the originals in the casting process, they retain details from the waxes that are not visible on the later serial bronzes.

CT: How did you assemble the cast of scholars who have worked with you on this volume?

SC: Richard Kendall is the foremost Degas scholar working today. As chief objects conservators at the National Gallery of Art, Shelley Sturman and Daphne Barbour have spent years studying Degas’s wax originals and have developed a deep understanding of his sculptural technique. When planning the Simon Degas catalogue, it was very important that the level of scholarship match the excellence of the collection.

CT: Which of the works by Degas that Mr. Simon sold during his lifetime do you regret losing the most?

SC: It is an 1876 pastel called Rehearsal of the Ballet. Degas sold it directly to the New York collector Louisine Havemeyer, and it is thought to be the first Degas work to have entered an American collection. Mr. Simon bought it in 1965 and sold it in 1973. It is now in the Nelson-Atkins Museum of Art in Kansas City. Every time I think of that beautiful pastel and its important history, it breaks my heart! 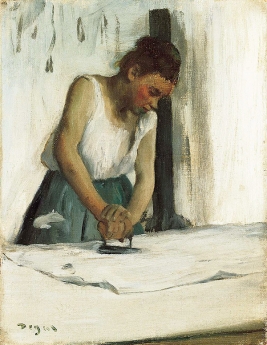 CT: Do you have a particular favorite amongst the 102 works by Degas that are in the museum today?

SC: It is the Laundress, a wonderful tiny oil painting of a woman ironing. It is a spare composition in white, black, and gray, with just a tinge of red on the woman’s face and hands to reflect her toil over the ironing board. Degas painted a series of washerwomen and ironers, but this is the smallest and one of the most sensitively painted.