An Interview with Conservator Kari Rayner 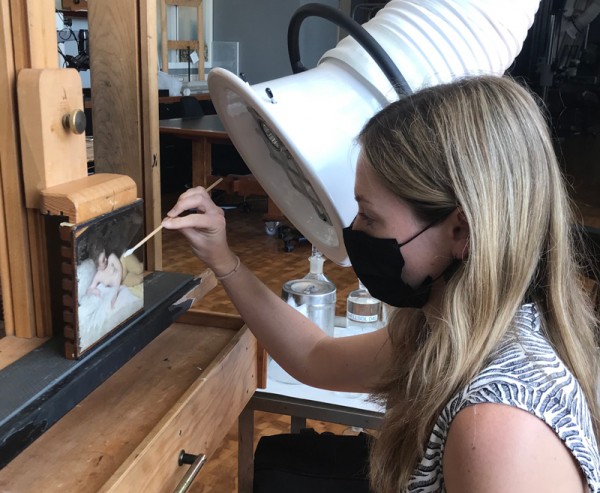 Emily Talbot: Kari, you’ve been studying the 18th-century French artist Antoine Watteau for some time now. Can you tell us about your interest in his work and how it relates to recent exhibition and research projects at the Getty?

Kari Rayner: I find Watteau to be an endlessly fascinating artist. In many ways, he operated outside the French Academic tradition. He was economical and experimental, and over the course of a relatively short career, he was idiosyncratic in his use of materials and his techniques. Watteau habitually recycled imagery between different works, creating unexpected linkages between many of his drawings and paintings, and he would frequently revise compositions dramatically during the painting process. The recent Getty exhibition on Watteau afforded us a unique opportunity to carry out new technical studies of several paintings—including the Norton Simon’s Reclining Nude—providing fresh insights into his practice and exploring the relationships between this intriguing artist’s works.

Jean-Antoine Watteau (French, 1684–1721), Reclining Nude, c. 1713–17, oil on panel, The Norton Simon Foundation, before, during and after its cleaning at the Paintings Conservation Studio of the J. Paul Getty Museum

ET: The Norton Simon’s panel painting Reclining Nude traveled to the Getty for technical analysis in 2021 before going on view in La Surprise: Watteau in Los Angeles. It then returned to the Paintings Conservation Studio after the exhibition closed in February for further treatment and study. Can you tell us about the condition of the Reclining Nude when it arrived at the studio, and the analytical techniques and conservation work that you and your colleagues have undertaken?

KR: In order to study Reclining Nude, we performed several noninvasive imaging techniques. I conducted infrared reflectography (IRR) and X-radiography, and Scientist Catherine Patterson from the Getty Conservation Institute carried out macro X-ray fluorescence spectroscopy (Ma-XRF). These different techniques provided more information about the condition of the painting and the development of the composition, and they allow us to infer the pigments Watteau used.

However, the painting’s surface was covered with a very thick, yellowed, glossy varnish, and the background had been heavily restored, which complicated our analysis. These issues also impacted the viewing of the painting, so in conversation with Norton Simon colleagues, we decided to carry out treatment after the exhibition closed.

I began by removing the discolored varnish and previous restoration material. This provided a great aesthetic benefit for the painting by reestablishing spatial depth, restoring the delicate palette of the nude figure and bedding and uncovering details in the background that had previously been obscured. At this treatment stage, we repeated our IRR and Ma-XRF analyses to gain a better sense of the painting without restoration material present. I then revarnished the painting and inpainted damages to the paint layer. 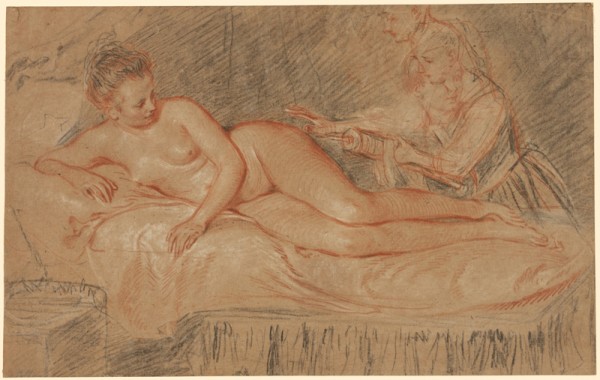 ET: What have we learned about the Reclining Nude as a result of your cleaning and study? Have you been able to clarify the painting’s relationship to the Getty’s drawing, The Remedy?

KR: It was presumed in the past that the Getty’s drawing, The Remedy, was a preparatory study for the painting. On that basis, one of the major questions of this research was whether the additional figure (of which there are several iterations) seen at the right side of The Remedy was ever present in Reclining Nude. Unfortunately, the evidence we’ve gathered is conflicting. Although we can hypothesize that the painting’s panel support was cut down on the right side, possibly to amend the composition, we did not detect any traces of an additional figure during our study.

Although we may not be able to answer this question decisively, this investigation has been nonetheless edifying in terms of Watteau’s painting technique, and it has been a great privilege and joy to treat and study this exquisite little painting.