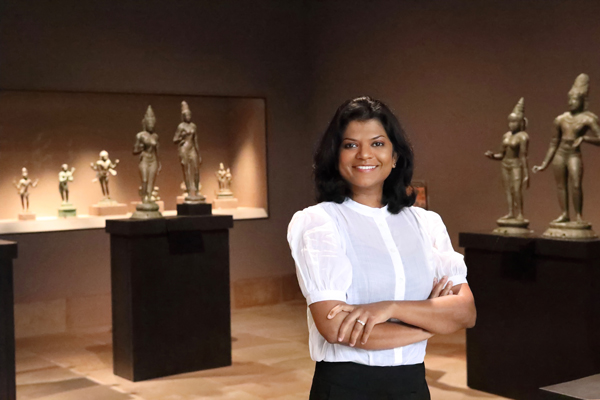 Emily Talbot, Chief Curator: Welcome, Lakshika. Tell us about yourself. How did you develop an interest in art history?

Lakshika Senarath Gamage: I credit my parents for sparking my initial interest in art by taking me to museums, galleries and exhibitions from a very young age. I often spent my school holidays in Kandy, Sri Lanka, which is my mother’s hometown. I remember avidly observing the 18th-century Royal Buddhist temple wall paintings in Kandy with golden yellow Buddhas in saffron robes, crimson backgrounds, mythical monsters and deities hovering over the entrances and stylized lotus motifs on the temple ceilings. As a student, I often imagined the functions of Kandyan royal ateliers and artisans as I created my own paintings. However, there were no opportunities to raise these questions as I studied within a British curriculum.

As an undergraduate double-majoring in International Studies and Studio Art (oil painting) at Denison University in Ohio, I started my formal training in art history. For my senior thesis, I analyzed how 18th-century Kandyan wall paintings functioned as a visual guide that documented royal patronage and the flow of artisans along the Indian Ocean trade routes. Studying familiar images from childhood never felt like an arduous task but an absolute thrill. South Asian art history eventually became the course of my higher education and career.

ET: You recently finished your PhD at UCLA. Does your dissertation research relate to the work you are doing at the Museum?

LSG: My primary field was South and Southeast Asian art, while my minor was Museum Studies. For the dissertation, I studied the syncretic nature of three Hindu and Buddhist temples in central Sri Lanka (from the 13th to 18th centuries) and their artistic exchanges between South India (Tamil Nadu and Kerala). During this time, migrant artisans traveled within the Indian subcontinent, transcending religious and linguistic boundaries to create a sense of shared iconography while maintaining regional distinctions. While early artisans catered to royal patrons by building monumental Buddhist and Hindu temples, Buddhist art was also commissioned as a tool for merit-making by lay patrons. Additionally, there are motifs that are neither Hindu nor Buddhist and that conjure up secular and cosmopolitan imagery such as planetary deities, and various zoomorphic and vegetal designs, used to decorate architecture. Each category requires methodological interpretation, and this three-pronged inquiry formed the core of my dissertation research.

The Norton Simon Museum collection is a rich testament to these three production processes, and due to the expansive nature of the South and Southeast Asian collection (1000 BCE–20th century), I can broaden the scope of my research with a multitude of analytical lenses. As an art historian, it is a pleasure to work with this collection and interpret such esoteric subject matter.

ET: Although you joined the Norton Simon staff in November, I understand you’ve taught from the collection for many years. Can you describe one or two objects that you find particularly rich for interpretation?

LSG: Combining storytelling and art history sparked much interest in my students. Hindu and Buddhist mythology and historical narratives recount tales of benevolent deities that unabashedly display their wrathful sides to protect their devotees, lengthy battles that saw the rise and fall of empires, celestials who would aptly intervene in mortal matters and various other subjects. 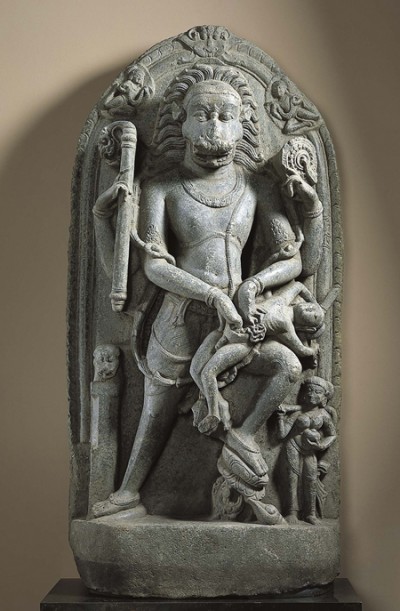 There are many stories associated with the objects in the Norton Simon Museum collection, and the Chola bronze gallery is particularly interesting in this regard. While Shiva Nataraja [Lord of the Dance] resplendently performs his cosmic dance, the bronze icon also functioned as a royal symbol that emboldened Chola military power as the empire expanded into Sri Lanka and Southeast Asia. Similarly, Hanuman, the monkey general who is instrumental in the battle of the Hindu epic Ramayana, assumes a facetious pose, leaving room for further interpretation. In an adjacent gallery, a chlorite Narasimha, the man-lion avatar of the god Vishnu, is seen nonchalantly gazing at the viewer while disemboweling a tyrannical king. This stele represents Vishnu’s good triumphing over evil. Such stories are always useful in making distant subject matter and iconography more meaningful and intelligible to students.

ET: Do you have any exhibition projects in the works?

LSG: I am delighted to work on my first exhibition to showcase various benevolent bodhisattvas and Buddhas, along with votive objects from South and Southeast Asia. My goal is to offer visitors a curative and harmonious space and to create a visual path from the mundane to the sacred, mimicking the ambulatory path of a Buddhist or Hindu temple. The art from the Norton Simon Museum collection would offer visitors some much needed peace and solace as we collectively emerge from a pandemic-ridden, turbulent time.