This interview with Curator Gloria Williams Sander and Tiarna Doherty, who was then an associate paintings conservator at the J. Paul Getty Museum, was first published in the Museum’s Summer 2011 Newsletter.

While planning for the exhibition Surface Truths: Abstract Painting in the Sixties, Curator Gloria Williams Sander and Conservator John Griswold evaluated the condition of the works to be included. They found that one painting, Jack Youngerman’s Red-Vermillion, had cracks on the surface and areas of yellowing on the white pigment. In collaboration with conservators at the J. Paul Getty Museum and scientists at the Getty Conservation Institute, as part of the Getty’s Modern and Contemporary Art Research project, Red-Vermillion was analyzed, cleaned and conserved. Here, Gloria Williams Sander talks to Tiarna Doherty, (formerly) Associate Conservator of Painting from the Getty Museum, about the process: 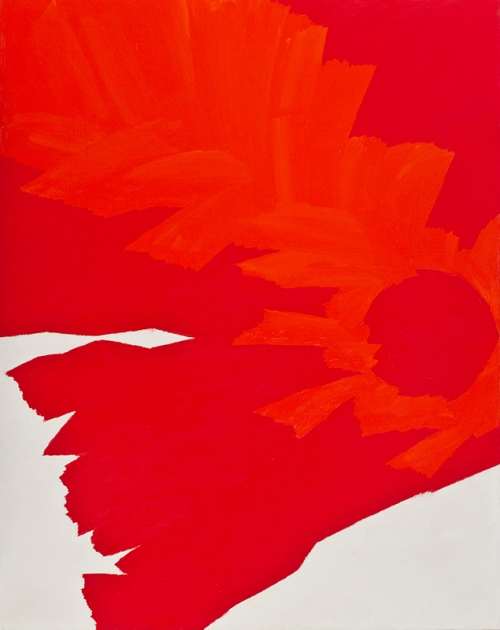 Gloria Williams Sander: What were the first steps you took to prepare this painting for conservation and restoration?

Tiarna Doherty: The painting did not need any special preparation, since it was structurally stable, which meant that it was secure and under uniform tension. Before working on a painting, it is important to spend as much time looking at the painting and getting to know it. In the case of Red-Vermillion, it was useful to read publications about the artist and see other paintings from the same period. It was also useful to read existing interviews and consult with colleagues in other museums about their experience in working on paintings by the artist.

GWS: You interviewed Jack Youngerman. Was it helpful to your work?

TD: It was extremely helpful to speak with Mr. Youngerman. He told us about his preferences for materials as well as his working method. Hearing him share his aesthetic priorities was incredibly important, as it helped inform our decisions. For example, seeing a solid field of red color in this painting was important to him, and the cracks that had developed, revealing the white preparation layer, were a visual distraction.

GWS: Did analysis of the paint layers indicate the order in which the artist painted the red, orange and white?

TD: Close observation of the painting answered this. For example, through cracks we could see that the red was applied directly over the white preparation. In the white paint, differences in gloss suggested where the white paint had overlapped the red paint. Furthermore, in cracks that existed we could use a microscope to see the layered structure. By eye, one can see that Mr. Youngerman mixed a yellow and red paint to create the orange color. This is seen in the variation in color in the brushstrokes. When one sees the edges of the canvas, one can see the individual colors. Paint analysis confirmed this observation.

GWS: Oil is a very traditional medium for painting. Were there any surprises with regard to the pigment here?

TD: No. From doing small cleaning tests, we determined that the red and orange paints were sensitive to water, which has been observed by many conservators working on modern and contemporary paintings. Mr. Youngerman told me that he used Windsor & Newton oil paints at the time he worked on Red-Vermillion. One interesting observation is that there is no vermillion, a mercury-based pigment, in Red-Vermillion. The reds and oranges are cadmium-based pigments.

GWS: Has the paint layer held up well over time?

TD: Yes, overall, the paint is in very good condition. The zinc white passages have a number of cracks, which may be due to the material (zinc white has been observed to be brittle over time) and to the strong tension of the canvas on the stretcher. This is a common conservation issue.

GWS: Describe the collaboration between you and the Getty Conservation Institute (GCI) scientists.

TD: The scientists at GCI have been analyzing the paints used in Red-Vermillion. We hope to learn more about why the cadmium-colored paint films are so water-sensitive, as it will influence how paintings are conserved and restored in the future. In the field of conservation, we know of other examples of such sensitivity, but do not always have the resources to analyze the paint.

GWS: Finally, what was the most rewarding aspect of your work with Red-Vermillion?

TD: Being able to communicate with Mr. Youngerman during the course of treatment and feel confident that our treatment decisions respected his aesthetic intentions was very satisfying. Seeing the painting hanging on the walls of the Norton Simon Museum within the context of abstract painting from the 1960s has also been a great pleasure for everyone involved in the project.

Jack Youngerman passed away in February 2020 at the age of 93. Read his New York Times obituary here.