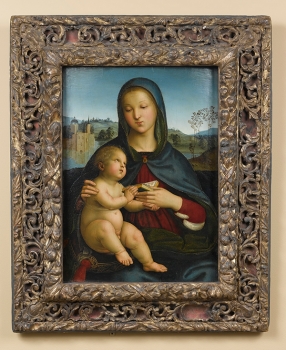 Raphael’s Madonna and Child with Book, c. 1502–03, one of the most beautiful Renaissance paintings of this subject on the West Coast, is also one of the highlights of the Norton Simon Museum’s collections. At the time of its acquisition by the Norton Simon Art Foundation in 1972, Mr. Simon selected the beautifully carved and gilded frame that has surrounded the Raphael for the last forty years [Fig. 1]. Although an important frame in its own right, it postdates the painting by almost a century. Additionally, the rich, sculptural carving of the frame posed another concern, as it casts a considerable shadow over the brilliant blue sky that silhouettes the Virgin’s head.

Last year the Museum began a search for a new frame befitting the subject, scale and historical period of Raphael’s masterpiece. Paul Mitchell in London, one of the most respected frame-makers in the world, worked to create a new, hand-carved frame that blends elements from a tabernacle-style frame and a cassetta, or “little box” frame. 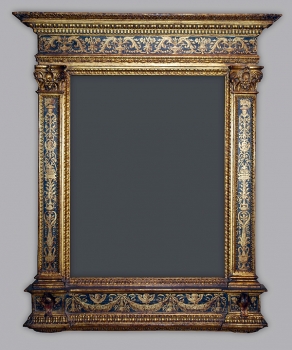 Fig. 2: A Tabernacle-style frame from the Museum’s collection

Tabernacle frames, which were inspired by church architecture, became fashionable in the 15th century; they incorporated formal elements, such as columns, pilasters and pediments. This frame type was commonly used to surround religious images, particularly images of the Madonna and Child [Fig. 2].

Cassetta frames are simplified versions of the tabernacle form, with the same profile on all four sides. Adapted for matter-of-fact subjects such as portraiture and historical narratives, cassetta frames gained currency during the 16th and 17th centuries, thanks to their versatility with regard to scale and decoration. 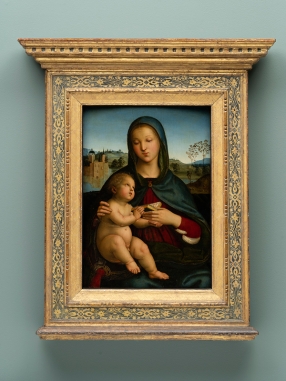 Fig. 3: Madonna and Child with Book is now surrounded by this beautiful replica of a late 15th/early 16th-century Renaissance frame that incorporates elements from tabernacle and cassetta styles

These two different approaches to framing, one devotional and one secular, inspired the new framing solution for Madonna and Child with Book [Fig. 3]. Vestigial elements from the tabernacle style, such as the cornice and pedestal, convey a formal link with the heavenly Church, while the cassetta form encourages a more immediate connection between the individual worshipper and the celestial image. This intimate and elegant frame is suggestive of the surrounds used for a private devotional work that a patron might pray to in a bedchamber, annex with prie-dieu, “a kneeler,” or small domestic chapel. It is an ideal frame type for images of the Madonna and Child, with their overtones of sacred domesticity.

The transitional nature of the frame is notable, coincidentally, because the Madonna and Child with Book marks a similar moment of transition in Raphael’s youthful career. He moved away from the influence of his first master, Pietro Perugino of Umbria, to the stimulating artistic environment of Florence, where he witnessed the innovations of Leonardo da Vinci and Fra Bartolomeo.

Gloria Williams Sander is a curator at the Norton Simon Museum.