Solace through Sculpture: Uncovering the History of a Plague Saint Since joining the Norton Simon Museum’s curatorial team in 2019, it has been thrilling to uncover opportunities for new research in the Museum’s collections. Last summer while preparing for my forthcoming exhibition The Expressive Body: Memory, Devotion, Desire (1400–1750), I came across a 15th-century Italian polychrome—or painted—sculpture of Saint Sebastian, which has never been on view to the public (Figure 1). Standing just under five feet tall, the figure of the saint is almost nude except for a simple undergarment. His elbows jut out from behind his back where his hands are bound to a sculpted tree trunk, yet despite this predicament Sebastian’s face is serene. The saint’s body is punctured with holes that are now plugged, though they are still surrounded by remnants of dripping red paint, indicating that the now-sealed apertures were meant to indicate wounds. At one time, arrow shafts protruded from these “injuries” though they have since been lost or removed. According to legend, Sebastian was a Roman soldier who was shot with arrows as punishment for his Christian faith. He survived this onslaught only to be stoned to death and tossed unceremoniously into the sewers. Sebastian is usually depicted tied to a tree, his body bristling with arrows, as in a 1464 fresco by Benozzo Gozzoli in the main church of San Gimignano in Italy. Like the Simon’s Sebastian, Gozzoli’s saint is shown with his arms tied behind him, stoically gazing upwards towards Christ and the Virgin Mary (Figure 2). In 15th-century Italy, Sebastian’s pious endurance and miraculous recovery was associated with salvation from the bubonic plague. His bleeding wounds were visually similar to the sores caused by the pestilence, and in some cases the offending arrows were used to symbolize vectors of disease. For instance, Gozzoli painted another fresco in San Gimignano depicting Saint Sebastian shielding the city from the plague’s scourge, represented as arrows hurled by a wrathful God (Figure 3). Sebastian was widely popular in Europe as a protector of those suffering from the plague, which recurred in devastating outbreaks from the 14th to 17th centuries, leading to the production of numerous images and sculptures of the saint. 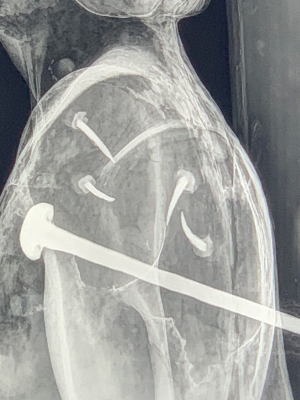 Our Sebastian has been reasonably identified as a 15th-century northern Italian sculpture, but beyond this little is known. Like many other polychrome sculptures of this period, it likely entered the international art market a few centuries ago, and the histories of such objects can be difficult to trace. While the written record is scarce, however, much knowledge can be gained from studying the physical sculpture itself. This February, in collaboration with the Museum’s conservator John Griswold and the Decorative Arts and Sculpture Conservation Department at the Getty Museum, we used x-radiography and XRF technology to examine the structure and materials of the sculpture. The team was excited to learn that some of the more nuanced elements of Sebastian’s musculature were molded in gesso over a wooden armature, revealing the sculpture’s material composition to be more complex than we initially thought. We also discovered that the saint’s torso is adhered to the vertical support with a massive nail, reminiscent of the arrows that once pierced the figure’s exterior (Figure 4). In further analyzing the sculpture’s physical properties, we hope to better understand its original context, how and where it was produced, and the ways it may have generated meaning for viewers at the time.

Observing these data-collecting procedures, though they were performed on an inanimate object, felt strangely medical, and gave the carved figure of Sebastian an uncanny lifelikeness. While our analysis occurred in a vastly different context from the sculpture’s original environment—a museum laboratory rather than a community chapel—I wondered if my brief impression of Saint Sebastian as a living body perhaps resonated with a 15th-century viewer’s experience of the carved saint, who was believed to be an active intercessor for devotees seeking protection during one of Europe’s deadliest pandemics.

Saint Sebastian will be included in the upcoming exhibition The Expressive Body: Memory, Devotion, Desire (1400–1750), and we look forward to sharing the in-person experience of this fascinating sculpture with our visitors once the Museum safely re-opens.

Maggie Bell is an Assistant Curator at the Norton Simon Museum.