All Consuming: Art and the Essence of Food 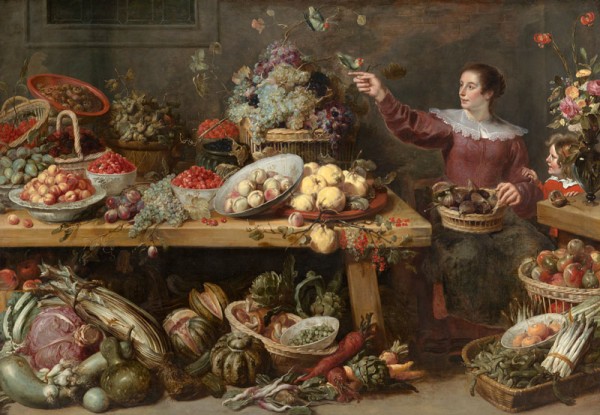 Pasadena, CA—The Norton Simon Museum presents All Consuming: Art and the Essence of Food, an exhibition that explores how artists responded to and shaped food cultures in Europe from 1500 to 1900. Food and drink appear nearly everywhere in the history of European art, in depictions of luscious fruits and vegetables, sumptuous feasts and bustling markets. Such images not only offer aesthetic appeal of comestibles but also reveal actions and dynamics—indulging, abstaining, buying, selling, making, growing, craving and sharing—that give food profound social meaning. The objects on view, some 60 paintings, prints, photographs and sculptures from the Norton Simon’s collections, examine a range of relationships with eating and drinking, both positive and negative, organized thematically into sections titled “Hunger,” “Excess” and “Sustenance.”

Hunger, an invisible sensation, presents a challenge for artists. It can be represented though physically gaunt figures like those in Francisco de Goya’s Disasters of War series, or implied through relationships of asking and giving, as in Rembrandt’s tender print of a rural migrant family at the door of a wealthy city dweller. Several of the works in this section were created during moments of food insecurity witnessed by the artists themselves, who employed confrontational or sympathetic visual strategies to convey these experiences. Hunger is shown with different faces, as something to be feared, remedied or even admired, in the case of weathered hermit monks who suppress bodily needs to pursue spiritual goals.

“Excess” explores depictions of morally questionable consumption, which were shaped by historically specific attitudes about gender, class and race. For instance, the satirist William Hogarth’s widely circulated print Gin Lane, published the same year that Britain’s restrictive Gin Act was enacted, depicts the effects of the perceived vice associated with London’s poorer classes. Reformers were particularly dogmatic about perceived failures of motherhood, centrally illustrated in Hogarth’s print by a gin-drunk woman with bared breasts, who reaches clumsily into her snuffbox while her child tumbles from her arms. Indulgent and potentially addictive goods like tobacco, coffee and chocolate, often imported from European colonies, inspired sexualized depictions of eating and drinking inflected with racial stereotypes. In Achille Devéria’s Odalisque, a woman in an exoticized “Eastern” costume reclines on a divan. A tray of coffee sits to her right, and she exhales a puff of smoke from her cigarette, her body displayed for the viewer’s visual consumption.

In “Sustenance,” images of food emphasize comfort and plenty, connected, particularly in northern Europe, to land, labor and commerce. Seventeenth-century Dutch and Flemish still-life paintings, while almost scientific in their naturalism, offer fantastical images of abundance. In Frans Snyders’s spectacular depiction of a stocked larder, the luminously painted citrus, berries and gourds would have grown in different seasons and regions, yet they appear together in heaping mounds. Snyders painted these oversized scenes for elite urban patrons who idealized agrarian living but primarily purchased produce in city markets. In 19th-century France, increased political interest in rural labor led artists such as Camille Pissarro to focus on those who cultivated and sold food. The Poultry Market at Pontoise positions the viewer as a shopper, enveloped by the crowd. Pissarro, a critic of capitalism and mass production, celebrates the social interactions of the marketplace over its wares. Only a basket of eggs and a few ducks in the corners indicate the vendors’ specialties.

The third and final gallery brings the exhibition’s broader themes closer to home through Edward Weston’s and Manuel Alvarez Bravo’s photographs of California and Mexico in the 1930s. Weston’s sweeping views of ranches and vineyards offer a picturesque vision of food production in California, whereas Alvarez Bravo’s photographs of restaurants and drinking fountains capture casual, day-to-day encounters with food and drink. These works will be accompanied by a response space that invites viewers to contemplate art’s continued role in shaping our relationship with food, not just as a necessity of survival but as an essential for cultural life.

All Consuming: Art and the Essence of Food is organized by Assistant Curator Maggie Bell. It is on view in the Museum’s lower-level exhibition wing from Friday, April 14 through Monday, August 14, 2023. A series of in-person and web-based programs and features will be offered in conjunction with the exhibition.

High-resolution images from the exhibition may be obtained by completing the request for below.

Read about the exhibition

Images for the Press

About the Norton Simon Museum

The Norton Simon Museum is known around the world as one of the most remarkable private art collections ever assembled. Over a 30-year period, industrialist Norton Simon (1907–1993) amassed an astonishing collection of European art from the Renaissance to the 20th century, and a stellar collection of South and Southeast Asian art spanning 2,000 years. Modern and Contemporary Art from Europe and the United States, acquired by the former Pasadena Art Museum, also occupies an important place in the Museum’s collections. The Museum houses more than 12,000 objects, roughly 1,000 of which are on view in the galleries and gardens. Two temporary exhibition spaces feature rotating installations of artworks not on permanent display.

Location: The Norton Simon Museum is located at 411 W. Colorado Blvd. at Orange Grove Boulevard in Pasadena, Calif., at the intersection of the Foothill (210) and Ventura (134) freeways. For general Museum information, please call (626) 449-6840 or visit nortonsimon.org.

Connect with Us: Visit us online for information on our many virtual programs, or stay connected through our social media channels.